Despite a global recession, investment levels in energy efficiency over the last twelve months have remained strong according to the 2010 Energy Efficiency Indicator (EEI).

During March and April of 2010, the Institute for Building Efficiency partnered with the International Facility Management Association (IFMA) and the American Society for Healthcare Engineering (ASHE) to conduct a survey of more than 2,800 executives and managers responsible for facilities budgets and energy use in commercial buildings across the world.

The global Energy Efficiency Indicator study is conducted annually to track the priorities, practices, investment plans, and return on investment criteria among those on the front lines of energy management in commercial buildings. While the EEI has been conducted and published in North America for the past four years, this year marks the first time a survey on this topic has been conducted across Canada, China, France, Germany, India, Italy, Poland, Spain, United Kingdom and United States.

Planned energy efficiency investments are expected to be strong in 2010, motivated primarily by concerns around cost reduction, climate change, enhancing public image, and taking advantage of government and utility incentives. Across all regions surveyed, energy management is considered a priority among building decision-makers (92 percent). Notably, respondents from India (85 percent) and China (80 percent) were more likely to consider energy management very or extremely important as compared to those in Europe (55 percent) and North America (53 percent).

Survey respondents expect energy prices to climb by 9 percent during 2010 and say that improving energy efficiency in buildings is their most important carbon emissions reduction strategy. While enthusiasm for and attention to energy efficiency remains high, leaders say capital availability is the greatest barrier to capturing the potential energy savings. 29% of those surveyed indicate that their capital budgets are insufficient to fund all projects meeting their return on investment criteria.

The highest number of respondents this year came from the manufacturing (12%), healthcare (12%), information and communication technology (9%), construction (7%), consulting/legal services (6%), retail (4%), and government (4%) sectors. 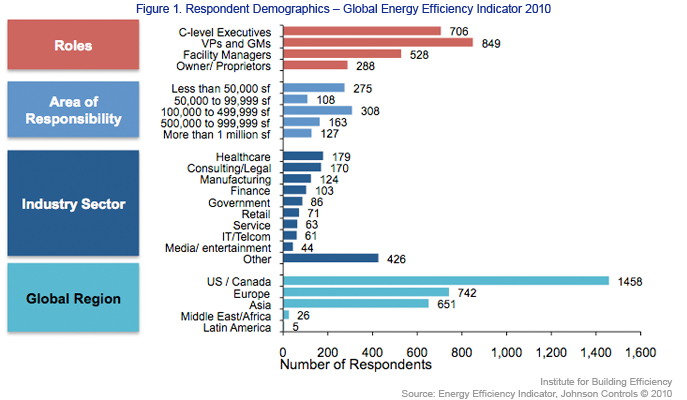 Energy efficiency is a strong and rising business priority

While motivations differ from region to region, cost savings is consistently the most important driver for energy efficiency investment

Several factors are driving organizations to pay increasing attention to energy efficiency. Cost savings is categorically the most important factor influencing energy efficiency decisions across all global regions. More than 80 percent of respondents cite cost savings as very or extremely significant, about twice as many as the next most influential factor. 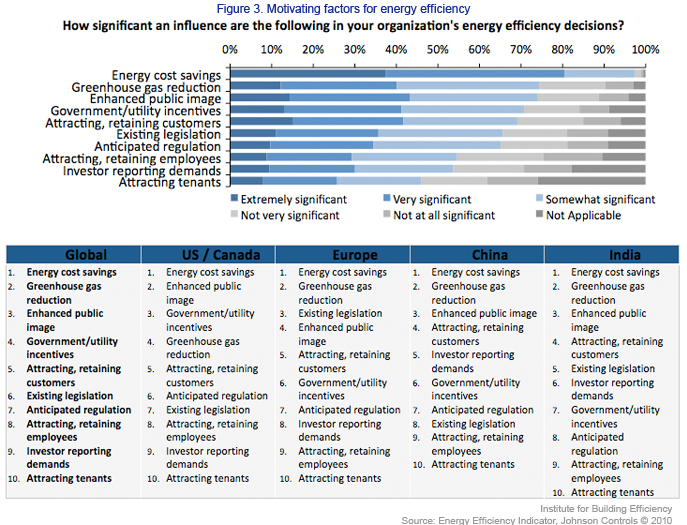 After cost savings, lowering greenhouse gas emissions is the second most important motivator for energy efficiency in all regions except North America, where boosting public image and taking advantage of government and utility incentives fall higher in importance.

Existing legislation is of particularly high importance in Europe, whereas in all other regions anticipated regulation is considered more influential than legislation already in effect. This contrast is indicative of Europe’s leadership in energy and climate legislation compared to other parts of the world where legislation remains uncertain.

It’s not surprising that energy cost is considered the most important driver. After energy prices fell with demand in many regions during 2009, 69 percent of global respondents expect energy prices to climb again during 2010. An additional 22 percent do not expect prices to change significantly, leaving only 9 percent who believe prices will decrease this year. The average expectation among all respondents is a nine percent increase in the combined price of energy over the next twelve months.

Further reinforcing the fact that climate concerns are rising on leadership agendas, the survey indicates that nearly one-third of organizations surveyed globally have made public commitments to reduce their greenhouse gas emissions.

About 28 percent of those surveyed don’t know their top carbon strategy or have not yet prioritized strategies. Among those who have prioritized, a large majority point to improving energy efficiency in their buildings as their top climate solution. Thirty-four percent of those surveyed across the world say improving energy efficiency in buildings is their most important strategy for shrinking their organization’s carbon footprint. Other top strategies include installing onsite renewable energy (11%), purchasing renewable power (8%), and improving fleet efficiency (6%).

Business leaders have varied in their response to economic conditions. Somewhat surprisingly, as a result of the recession, 56 percent of respondents say they have invested the same or more in energy efficiency over the last 12 months compared to historical levels. Efficiency investments are a fast and low-risk way to cut operating costs.

As shown in Figure 6, which compares investment among leaders responsible for managing 100,000 square feet or more, the fraction planning to make efficiency investments is highest in China, followed by India, Europe and then U.S./Canada. 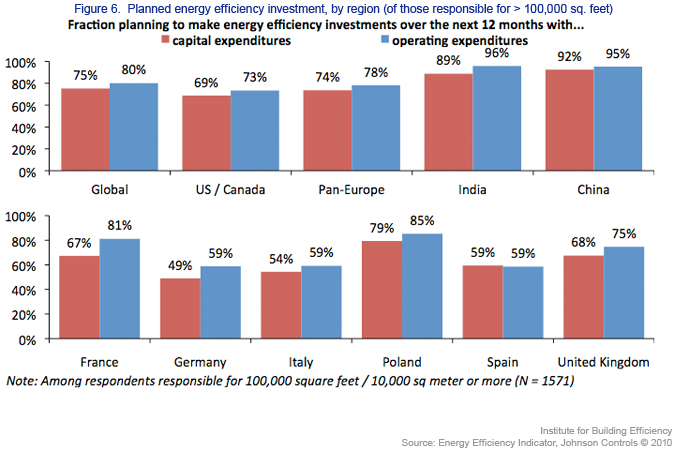 Access to capital constrains many organizations from making efficiency investments

While enthusiasm for and attention to energy efficiency remains high, building executives say limited capital availability (29%) is the greatest barrier to capturing the potential energy savings, followed by issues with insufficient payback (18%) and savings uncertainty (18%).

What type of financial return is sufficient for building owners? Forty-eight percent of respondents require investments to pay back in less than three years when making significant energy efficiency investments. A very small fraction (5 percent) requires a one year payback or less, while 90 percent require a ten-year payback or less. The average maximum allowable payback is 3.1 years this year.

In addition to these measures, a surprisingly high number of respondents undertook more significant efficiency improvement efforts last year, including:

Looking ahead, global business leaders have varied expectations of technological improvement for clean energy technologies. When asked to select three technologies expected to see the greatest improvement in performance-to-price ratio over the next ten years, solar photovoltaic (46%) and lighting (46%) technologies were selected by the greatest number of respondents. Next came smart building technologies such as integrated control and demand response (33%), electric and plug-in hybrid vehicles (28%), nuclear power (19%), carbon capture and sequestration for coal plants (8%), and stationary energy storage (7%).

Watch this video for more information about the global Energy Efficiency Indicator study. 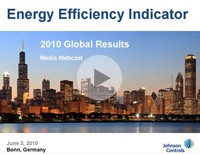