During March of 2010, Johnson Controls partnered with the International Facility Management Association (IFMA) and the American Society for Healthcare Engineering (ASHE) to conduct the North America Energy Efficiency Indicator (EEI) survey of more than 1,400 decision makers responsible for managing energy use within commercial buildings across North America.

In its fourth consecutive year, the EEI survey examines the attitudes, practices, investment plans, and expected return-on-investment for energy management initiatives among decision makers in commercial buildings. Comparing results to those from prior years provides an outlook on energy management trends and provides insight into how events from the past year have impacted energy efficiency activities.

Rebounding from a 2009 drop, planned spending on energy efficiency across North America is expected to increase nearly to 2008 levels, motivated primarily by cost reduction, brand differentiation, government/utility incentives, and climate change concerns. Leaders expect energy prices to climb during 2010, and say improving energy efficiency in buildings is their most important carbon management strategy. While enthusiasm for and attention to energy efficiency remains high, business leaders say capital availability remains the greatest barrier to implementing projects that result in energy savings. 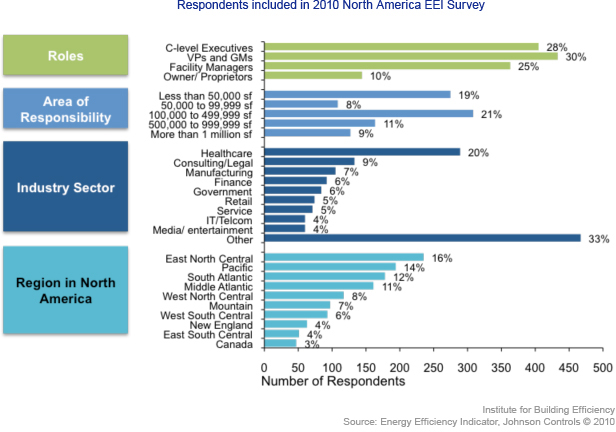 The 2010 EEI survey was completed by a total of 1,435 respondents across North America. Those surveyed this year included c-level executives (28%), vice presidents and general managers (30%), and facility managers (25%) from organizations large and small across a variety of industry sectors. The highest number of respondents this year came from the health care (20%), consulting/legal services (9%), manufacturing (7%), financial services (7%), government (6%), and retail trade (5%) sectors. 90% were from the private sector and 10% were from the public sector.

Respondents came from nearly all regions throughout North America. 60% of organizations surveyed spend more than $100,000 US dollars per year for energy (e.g. electricity, natural gas, and fuel oil) to power their facilities.

Despite a small dip since 2009, energy efficiency remains a strong business priority.

The factors cited as at least somewhat significant in energy efficiency decision making are: 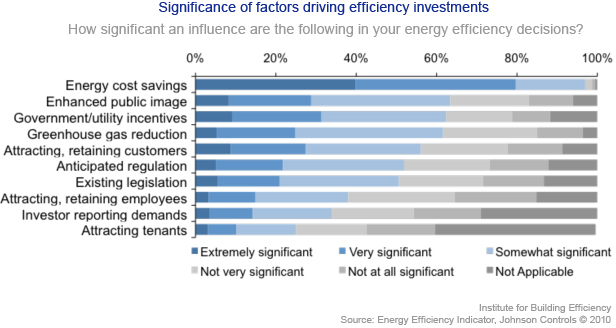 Executives believe energy prices will climb again in 2010 after falling in 2009.

Climate legislation is expected and is viewed as both a risk and an opportunity.

Building efficiency is the top priority for those seeking to decrease their carbon footprint. 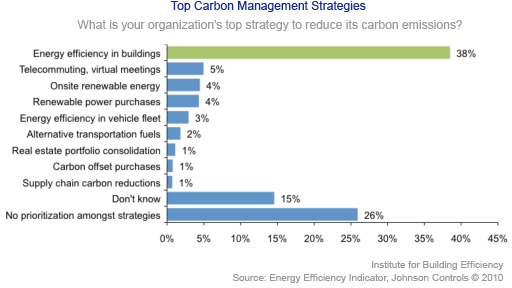 Lighting retrofits were the most popular energy efficiency measure over the last 12 months.

Leaders predict the greatest technological improvement in lighting and smart building technologies over the next 10 years. 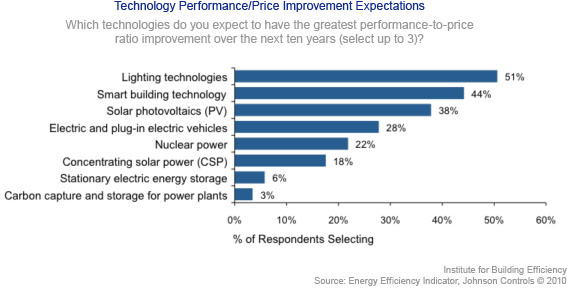