According to new research from the Johnson Controls Institute for Building Efficiency, investment in building energy efficiency remains strong in the North American healthcare industry, a leader among other sectors.

In March 2010, the Institute for Building Efficiency, the American Society for Healthcare Engineering (ASHE), and the International Facility Management Association (IFMA) conducted a survey of 2882 executives and managers responsible for making investments and managing energy use in commercial buildings across the world.  An annual effort, this global Energy Efficiency Indicator (EEI) study tracks the priorities, practices, investment plans, and return on investment criteria among those on the front lines of energy management in commercial buildings.

Based on the survey of 288 North American healthcare respondents, this article outlines some of the key 2010 results among healthcare organizations, how they compare to the broader results for North America as a whole, and the notable changes and trends since the successful 2008 study in partnership with ASHE.

Energy efficiency is of great importance to healthcare organizations.  Sixty-five percent of respondents in healthcare reported that they are paying more attention to energy efficiency now than they were 12 months ago.  Fifty-eight percent of respondents reported that energy management is very or extremely important for their organization, compared with 52 percent reported for North America overall.

Given the increased importance of, and attention to, energy efficiency within the healthcare sector, it will come as no surprise that healthcare organizations are more likely to be planning to make capital investments and operating expenditures in energy efficiency over the next 12 months.  The percentage of healthcare respondents planning such investments this year exceeds the overall percentage for North American by a 12-15 percent margin.

Some examples of the energy improvement measures that have been implemented within the past 12 months are listed in below.

There was also a general upward trend since 2008 in the percentage of healthcare organizations that aim to either certify their buildings to a recognized green building standard or to incorporate green elements into their new construction projects, with that total growing from 72 percent to 80 percent between 2008 and 2010.

The survey found that the most important decision driver for energy efficiency investment in the healthcare sector is the potential for cost savings, as 99 percent of respondents said that factor was somewhat, very, or  extremely important to their organization.  Cost savings was also the most important driver in North America and worldwide.  The full results for the healthcare sector are listed in Figure 1. 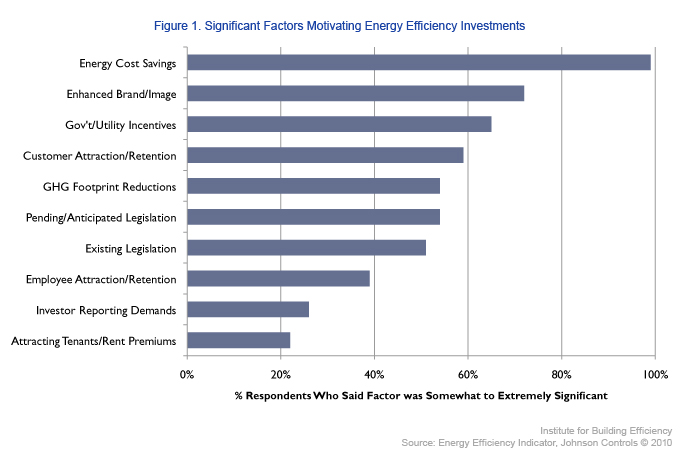 This importance of cost savings as a driver is further supported by the fact that 60 percent of healthcare sector respondents expected energy prices to rise in the next 12 months.  However, this percentage has dropped from 90 percent in 2008, and there is a correlated uptick in the percentage which believes that prices will not change significantly, from about 10 percent in 2008 to almost 30 percent in 2010.  This shows that the momentum behind energy efficiency is not likely to lose steam even as energy prices stabilize, that the business case is still strong, and is likely to remain that way.

Despite all of the good news about the sector’s plans to invest in energy efficiency, there are several barriers preventing healthcare organizations from investing to the extent they wish in order to capture the full potential cost savings.  The top two barriers reported by facility leaders in healthcare are:

Despite these obstacles, practitioners in the energy services field are working to overcome these barriers through financial and technological innovation.  On the financial side, there are a number of mechanisms that remove upfront cash requirement and allow customers to finance the projects over a longer period of time through arrangement similar to a lease.  Some of these structures must be classified as debt while others are able to be accounted for off of the organization’s balance sheet. Some of these structures are listed in Figure 2.  The results indicate that both healthcare and other organizations across North America are not taking full advantage of innovative financing structures, suggesting a need for continued education to build familiarity with these mechanisms. 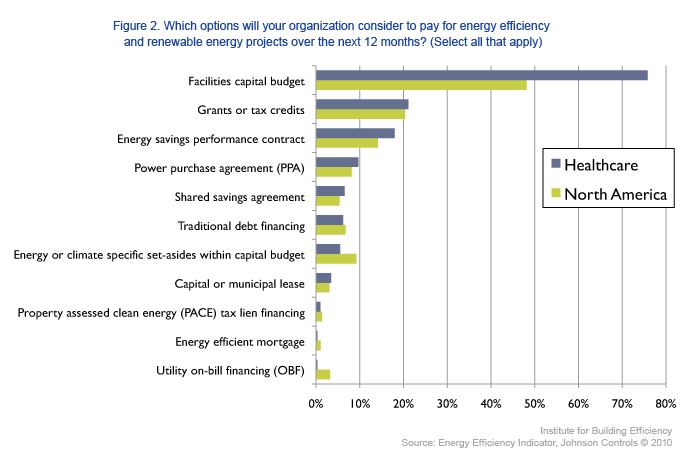 In addition, to boost financial return-on-investment, the industry is developing new and improved technologies that allow for deeper energy savings at a lower cost.  Healthcare respondents tend to believe that, over the next 10 years, the greatest performance-to-price ratio improvements will occur in lighting and smart building technologies (i.e. building system integration, demand response).  The rest of North American respondents tended to put more faith in the potential for photovoltaic solar energy and electric/hybrid vehicle technology to improve in cost-effectiveness over the next decade.  What is clear is that, as these technologies continue to develop, the ROI on energy efficiency project will continue to rise in lockstep, and this barrier will be gradually lowered.

Healthcare organizations are more focused than ever on doing well by doing good: saving money and the environment at the same time.  Even as expectations for energy price increases come back down to Earth, there is more attention than ever on improving the efficiency of buildings and processes.  But it is clear that good intentions are not enough to get these types of projects implemented on a large scale.  There are natural barriers to an efficient market that practitioners throughout the value chain are working to correct, and with the right mix of good policy, innovative technology and new financial structures, there is hope that the efficiency of the existing healthcare building stock can be dramatically increased.