New York City’s Greener, Greater Buildings Plan is designed to “promote cost-effective steps to create significant economic and environmental impacts”1 through efficiency improvements in buildings. By both guiding the market through increased information and enforcing action through code compliance and retrocommissioning, the legislation sets the tone for efficiency initiatives in municipalities around the world. It also has the potential to transform the building efficiency market by expanding and enforcing the rules of the game.

Questions about the program remain. For example:

Those questions aside, the Greener, Greater Buildings Plan has potential to streamline resource use in a city where three-fourths of total energy demand and carbon emissions come from buildings. It is set to transform and accelerate the pace of energy-efficiency investment in the world’s fifth-largest city.

The plan has four legislative components that affect commercial buildings in the city, and it is supported by two complementary city initiatives aimed at workforce development and energy efficiency financing. Here is a review and analysis of the plan. 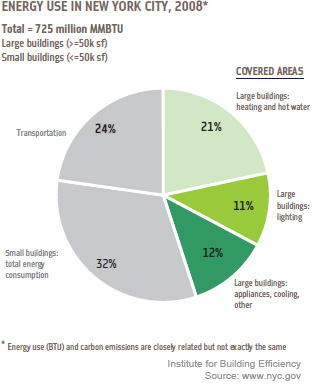 The city adopted the Greater, Greener Buildings Plan (GGBP) in December 2009 as part of PlaNYC 2030, introduced by Mayor Michael Bloomberg on Earth Day 2007. PlaNYC targets a 30 percent reduction in the city’s annual greenhouse gas emissions below the 2005 level. The GGBP is expected to account for about five percent of those reductions, in the process saving New Yorkers $700 million in annual energy costs and creating some 17,800 jobs.2

To demonstrate its commitment to the plan, the city led by example, committing $80 million annually – nearly 10 percent of its annual energy budget – to reducing energy and emissions from municipal buildings. In May 2010, the city also completed the first energy benchmarking of the 2,790 buildings in its portfolio, using the U.S. EPA’s ENERGY STAR® Manager tool to benchmark buildings larger than 10,000 square feet. The benchmarking data will be available online by Sept. 1, 2011.

This initiative requires buildings in the GGBP to assess their energy and water use annually, using the ENERGY STAR Portfolio Manager tool. (Certain building types not categorized in the Portfolio Manager tool, such as data centers and trading floors, are exempt.) In January, building owners must ask tenants to provide energy data using a city Office of Long-Term Planning and Sustainability (OLTPS) form, which must be returned to the owner by Feb. 15. The owners must then submit their benchmarking results to the city Department of Finance by May 1 each year, using an OLTPS form. Metrics include:

Currently, lighting accounts for about 18 percent of New York City’s energy use and greenhouse gas emissions.4 This creates a great opportunity to target lighting upgrades in the city’s one million existing buildings – 85 percent of which are expected to remain functioning in 2030.5 Local Law 88 mandates that buildings over 50,000 square feet be brought up to lighting standards in the New York City Energy Conservation Code by Jan. 1, 2025.

The lighting upgrade must comply with the code as it exists at the time of the upgrade only – the law does not require upgrades to comply with the code as it will exist in 2025. The law also requires major tenant spaces – larger than 10,000 square feet – to be electrically submetered by Jan. 1, 2025. At that point, building owners must provide tenants with monthly electrical consumption data and charges.

Building owners must undergo both an energy use audit and a retrocommissioning of their central systems, including the building envelope, HVAC systems, conveying systems, domestic hot water systems, and electrical and lighting systems. Reports must be submitted to the city Department of Finance every ten years, beginning in 2013. The calendar year in which a building owner must file with the city corresponds to the facility’s tax block number.

The energy audit must be an ASHRAE Level II Audit that identifies:

The retrocommissioning must ensure that systems and operations are running optimally. Compliance can be demonstrated through efficient calibration and sequencing, cleaning and repair, training, and documentation of maintenance records.

Buildings that are ENERGY STAR rated or LEED-EB certified can waive the audit, and buildings less than 10 years old can apply for a 10-year deferral for reporting. Owners of buildings under financial hardship may also apply for an extension.

The GGBP does not require building owners to make capital improvements to their facilities as a result of their audit and/or retrocommissioning. However, city buildings must undertake improvements if the measure is projected to provide a payback shorter than seven years.

The PlaNYC program offers two complementary initiatives to support the GGBP through workforce development and energy efficiency financing. Here is an overview:

The program is currently under development.

In Step With Other Cities

The GGBP builds off other government energy-efficiency initiatives around the U.S. and the globe. For example, the Berkeley, Calif., Commercial Energy Conservation Ordinance (CECO), adopted in 1994, requires commercial building owners to meet current CECO standards:

San Francisco’s Green Building Ordinance requires fundamental commissioning for new large commercial buildings and for existing buildings undergoing major renovations.6 As seen in Figure 1 below, other entities including the District of Columbia and the State of California have initiated benchmarking policies for commercial buildings. However, the GGBP is the first program in the United States to publicly list energy and water benchmarking and to tie the data into municipal tax information. In the European Union, Energy Performance Certificates (EPCs), which rate buildings based on resource use, have been under legislation since 2002, and the legislation will become stricter in the next five years. By increasing the availability of energy information, municipalities are able to make educated decisions about how to do long-term sustainability and infrastructure planning.

Figure 1: Benchmarking Programs in the U.S. 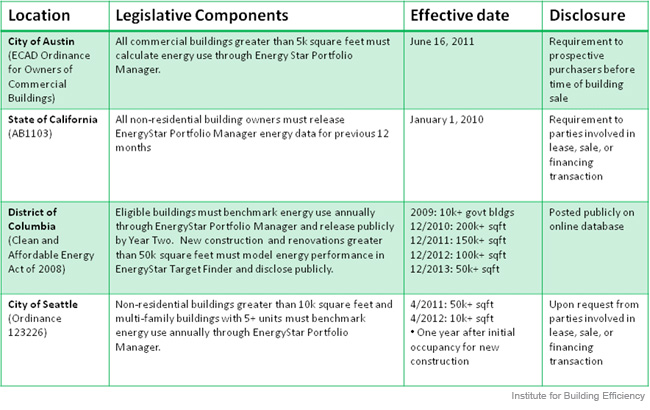 The GGBP represents a major step forward in building energy efficiency.However, questions about the program remain.

For example, the timing and depth of New York City Energy Conservation Code upgrades will have a tremendous effect on the market for goods and services in New York. The city will need to effectively decide when limits need to be pushed – that is, when it is appropriate to raise the standard for energy conservation in order to meet the PlaNYC goals. The city will also need to decide how far the “stretch” will be in changing the targets of those goals in the face of changing technologies. Because of these two factors, some well-intentioned building owners may alter their buildings early on to capture energy savings, but given that renovations may happen only every 20 years or so, there will be missed opportunities to capture additional energy savings through progressively stricter codes. It will require a delicate balance on the city’s part to find the appropriate timing and level of energy conservation in a cost-effective manner for building owners.

Another question is whether renovations may favor building owners with large facilities or with multiple facilities, as they can leverage economies of scale in the processes and materials they use. They may also be able to use their size to influence future legislation or code updates in their favor. Building owners with fewer square feet under management may need to invest proportionally more to satisfy the GGBP requirements, thus putting a further strain on their budgets.

Also to be resolved is how to square the GGBP with historic renovations. According to the New York City Landmarks Preservation Commission, more than 27,000 buildings in the city have been granted landmark status. These buildings are exempt from complying with Local Law 85 to update to the NYC Energy Conservation Code. It is possible that conflict will continue between those who wish to update buildings to modern energy standards and those who want to preserve the historic character of landmark buildings – even though there are several examples of a successful relationship between these two camps, including Johnson Controls’ work at the iconic Empire State Building in Manhattan. It remains to be seen how the GGBP will work with historic preservationists in New York and how effective renovations can be at reducing energy consumption while satisfying the Landmarks Preservation Commission goals.

It will also be interesting to watch how the tenant-building owner relationship evolves with benchmarking and submetering. For example, the GGBP sets out a timeline for building owners to collect energy data from tenants for use in benchmarking. However, it will be up to the owners to decide how to incentivize their tenants to provide energy data, or how to penalize them for non-compliance. In many cases, this requirement may change leases, and it will be up to the legal system to decide how to best incorporate information transfer between the owner and tenant. The verification process for the tenant data is not yet outlined, and therefore any decision-making by the city or by the building owner based on that data may be suspect on some level.

Finally, the question remains whether knowledge of energy information through benchmarking and energy audits will actually lead building owners to take steps toward reducing consumption. The GGBP assumes that because building owners are competitive with each other, benchmarking will motivate them to use less energy and improve their financial positions. However, beyond meeting the NYC Energy Conservation Code requirements in force at the time of renovations, and completing lighting upgrades by 2025, building owners are not required to make any capital improvements based on the energy information generated. While the required actions will surely lead to some incremental energy-efficiency gains, meeting the ambitious goals of PlaNYC may require more force.

A Framework for Change

Through the Greener, Greater Buildings Plan, New York City has begun to outline the steps required to meet its PlaNYC energy goals. While the program is new and details will need to be ironed out as it unfolds, the GGBP creates a framework for substantial improvements in energy efficiency in a large portfolio of commercial buildings.