In March 2011, the Fourth Session of the 11th National People’s Congress convened and approved the national economic and social development plan for 2011 and the 12th Five-Year Plan (FYP) for China.  The 12th FYP provides national development targets for 2011-2015.1  It establishes strategies for economic development, sets growth targets, and launches reforms via centralized governmental planning.  The 12th FYP for the first time includes formalized reduction targets for both energy and climate change, aiming to reduce energy intensity2 by 16 percent and greenhouse gas emissions by 17 percent.3

Buildings account for 28 percent of total energy consumption in China4,  and total consumption continues to grow dramatically. In 2010, China consumed over 13 percent more electricity and over 18 percent more natural gas than in 2009, according to the National Bureau of Statistics.5  Cooling, heating, lighting and other operational services are responsible for a large portion of the energy consumed in the commercial building sector. Reduction in consumption from those services presents an opportunity for commercial buildings to contribute to national energy and greenhouse gas emission goals.

The 12th FYP expands upon earlier programmatic efforts to reduce energy consumption laid out in the 11th FYP. This paper outlines the opportunity to align increased energy efficiency in commercial buildings with the goals established in the 12th FYP. We begin with a review of the opportunities and programmatic efforts initiated from 2005-2010, and then examine the 2011-2015 plan.

During the 11th FYP, the Central Government gave increasing priority to energy and greenhouse gas reductions. In November 2005, the government released a mandate to reduce energy intensity per unit GDP by 20 percent by 2010.6   The government set this goal recognizing the energy supply and environmental considerations China was facing, including:

• Ability to meet demand: By 2006, nearly 50 percent of global energy demand growth occurred in China: even with rapid building of new generation capacity, energy supply was barely keeping up with demand.

• Desire for energy security: About 80 percent of China’s electricity comes from coal.7   China is the largest producer of coal in the world, but became a net coal importer in 2009 (Figure1).8   In fact, annual coal imports increased 31 percent in 2010 and are predicted to surge another 63 percent in 2011 to more than 200 million tons.9

• Climate commitments and leadership: In November 2009, President Hu Jintao announced three climate mitigation actions to the United Nations, including a reduction in carbon intensity per unit GDP of 40 to 45 percent by 2020 based on 2005 levels.10  This announcement came after data showed that China’s annual greenhouse gas emissions surpassed those of United States 15 years ahead of projections,11 despite the fact that on a per capita basis China emits one-fourth the emissions of the United States.12

• Rapid Urbanization:   According to the World Resources Institute, by 2025, approximately 1 billion people will live in Chinese cities, and each of221 cities will have more than 1 million inhabitants (the United States has nine such cities). In part due to rapid urbanization and economic development, projections show commercial floor space by area will increase by 122 percent from 2010 to 2015.13

In response to these growing concerns, the Central Government unveiled a host of programs targeted to reduce energy and greenhouse gas emissions during the 11th FYP period. Many of those programs targeted energy-intensive industrial sectors, but several notable policies and programs focused on the commercial buildings sector to help meet the 20 percent energy intensity reduction goal. 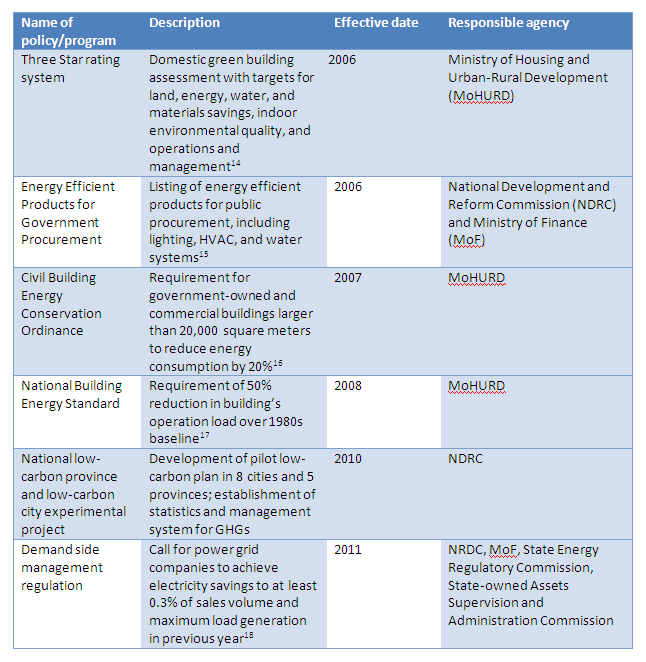 According to the Central Government, energy consumption per unit GDP decreased by 19.06 percent from 2005 to 2010, just under the 20 percent mandate.19  Analysis by Lawrence Berkeley National Laboratory’s China Energy Group shows that the efforts outlined above made substantial contributions to that progress and encouraged maintenance and strengthening of such policies and programs.20

The 12th FYP’s energy and emissions intensity targets give opportunity to a broad agenda of energy efficiency in commercial buildings. Focusing on the energy performance of buildings offers an opportunity to meet national goals even while meeting an increasing demand for new buildings and urbanization. If the 12th FYP goals encourage the commercial buildings sector to deliver 16 percent energy intensity reductions by 2015, an implementation plan will need to factor in options to achieve those reductions via changes in new building construction practices as well as renovation and upgrading of existing buildings. A number of cities have already received indications of the targets they will be responsible for achieving (Figure 2).

While details of programs and efforts continue to be defined and announced as the government looks toward policy implementation, a number of programs from the 11th FYP period are likely to continue. There have been discussions on the potential for additional pricing mechanisms at some point during the 12th FYP period, including a carbon tax or a cap-and-trade system, but details remain unclear.

Some of the programs that may support a greater focus on energy efficiency in buildings include:

• Expansion of renewable energy in buildings: The 12th FYP sets a non-fossil energy generating capacity target of 11.4 percent by 201523,  an increase from 9.6 percent at the end of the 11th FYP period. Much of the growth is expected to come from large new nuclear, hydroelectric, and wind installations,24  but the plan also calls for an increase in distributed generation.  Demonstration projects in Shanghai for building-integrated photovoltaic (BIPV) systems have been in effect for nearly a decade.25  Guangzhou’s Pearl River Tower (Figure 2), a 2.3 million-square-foot (214,000-square-meter) office tower, channels wind into the building on certain mechanical floors, where the wind pushes turbines to generate energy for the building.26  Many cities require solar thermal hot water heating technologies.

• Implementation of energy efficient building labeling: A national energy performance labeling program has been piloted in 11 cities and five provinces in China, and several provincial and municipal governments have unveiled building labeling systems of their own. Barriers such as capacity expansion, high cost to building owners, and complicated energy modeling tools will need to be overcome.29  As labeling becomes more mainstream through mandates, processes and tools should become more streamlined, and costs should decrease or be subsidized.

• Acceleration of energy-saving renovations to existing buildings: Pilot programs such as the $100 million Guangdong Energy Efficiency and Environment Improvement Investment Program sponsored by the Asian Development Bank are giving China experience with a variety of energy-conservation measures.30  To build capacity, programs like the Environment, Health, and Safety Academy at Lingnan University College in Guangzhou train future facilities managers in energy-savings techniques.31

Each of these elements offers opportunity for market transformation in reducing energy and emissions in commercial buildings. According to the 2010 Energy Efficiency Indicator survey by the Institute for Building Efficiency, the top strategy among Chinese organizations for reduction in carbon emissions was to improve energy efficiency in buildings. However, the same survey found that more than half of respondents faced uncertainty about the savings or lacked the technical expertise to implement projects.  Government programs, international cooperation and exchanges, and new approaches to construction and renovation can overcome these market barriers and improve comfort and energy performance in buildings, while helping to achieve energy intensity reduction goals.

China’s 12th Five-Year Plan sets ambitious targets for development and for the first time includes targets for reductions in both energy intensity (16 percent) and greenhouse gas emissions intensity (17 percent) per unit GDP). In the previous five years, new programs and policies were put in place that began to drive reductions throughout various economic sectors. In the commercial buildings sector, which is expected to grow to accommodate increasing urbanization, intensity targets can be met through a combination of new green buildings and increased energy efficiency in the existing building stock. Guidelines on building labeling initiatives, building energy efficiency codes and compliance, and energy efficiency retrofits for existing buildings are expected to help buildings contribute to national energy and emissions intensity reductions.

For further description of the process behind adoption of a Five-Year Plan in China, please visit the World Resources Institute China FAQs site: http://www.chinafaqs.org/blog-posts/how-china-developed-its-12th-five-year-plan