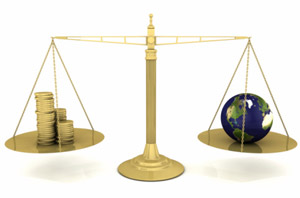 Global climate change has taken center stage as an environmental concern. To address it, policymakers around the world are designing and implementing policies to reduce energy use and lower annual carbon dioxide emissions, capture and burn methane gas, and change refrigeration technologies.

Buildings consume a significant amount of electricity, and in most parts of the world require air conditioning (associated with significant GHG emissions). Because of this, climate policy should include buildings as a key part of the climate solution. Buildings, for example, can host renewable energy technologies such as solar photovoltaic systems, or install smart building systems to lower energy use and thereby diminish dependence on inefficient power plants. Changing the way buildings are designed and operated in order to reduce emissions requires innovative policy approaches.

Market-Based Approaches: Policies That Put a Price On Carbon

Market-based climate policy approaches seek to decrease demand by adding cost to carbon emissions. Policymakers can influence the cost of emissions by either (1) requiring organizations to purchase permits to be allowed to emit greenhouse gases, or (2) adding a tax on the use of non-renewable energy sources associated with carbon emissions. In either case, the price signal induces emitters to seek ways to minimize that price increase and invest in technologies that lower their emissions.

Since the 1990’s, cap and trade has been the preferred market-based approach for improving air quality in the United States. Emissions are “capped” at a predetermined level deemed acceptable for the environment. Up to the level of the cap, a number of permits are issued, typically allowing the holder to produce one ton of emissions per permit. These permits are either auctioned off or provided to companies at the outset. Companies turn them in as they produce emissions. If they do not have enough permits, they either make reductions or purchase more permits from the government or from another company that has more permits than they require to cover their own emissions level. In this way, companies that uncover inexpensive emissions reduction opportunities benefit from investing in those technologies, as it allows them to “sell” the pollution they don’t use. Companies that have difficulty installing new pollution controls can buy permits at prices lower than what it would cost them to install the controls, while still helping to fund innovation elsewhere.

The environmental community has embraced the cap and trade approach for carbon emissions because it provides environmental certainty–the level of pollution is clear and predetermined—and because it incentivizes innovation. Europe established the first cap and trade program for GHG emissions in 2005: the European Union Greenhouse Gas Emission Trading Scheme. In 2009, the Northeastern United States implemented a regional cap and trade initiative to reduce regional carbon dioxide emissions. For more information on cap and trade, see the World Resources Institutes’ Bottom Line on Cap and Trade.

An alternative market-based approach puts a pre-determined price on carbon–a flat fee per ton of carbon dioxide produced from a specific activity. Proponents of a carbon tax believe that this approach provides economic certainty, whereas a cap and trade system allows for market-based price fluctuations and greater uncertainty. Carbon tax policy could also include tax credits for activities or investments that reduce GHG emissions, such as adding insulation or upgrading windows or chillers to be more energy efficient.

Sweden, Finland, the Netherlands, and Norway began implementing carbon taxes in the 1990s to reduce GHG emissions. Other European countries and Japan have enacted or are considering similar policies to tax nonrenewable energy use. In 2008, the Canadian Province of British Columbia also established a tax on fossil fuels starting at C$10 per metric ton of CO2-equivalent and increasing to C$30 per metric ton by 2012. The British Columbia tax is designed to be “revenue neutral,” with funds generated returned to consumers through tax credits, rebates, and lower corporate and personal income taxes.1 For more on carbon taxes, see the World Resources Institute’s Bottom Line on Carbon Taxes.

Both cap and trade systems and carbon taxes alter electricity prices, making investments in energy efficiency in buildings more economically attractive. With a smart grid interface, a smart building might also be able to provide electricity via demand response – allowing buildings to communicate with a smart utility to reduce demand rather than fire up a highly polluting power source. However, because the price of power is often hidden from a building tenant, and ownership structures and capital constraints act as investment barriers, electricity price alone may be an inadequate incentive to foster steps leading to a significant increase in building performance.

In fact, buildings have most often been targeted through codes and standards rather than through market based approaches, due to the diffuse price signal and incentive structures that favor the status quo and lowest first-cost options in building design and component sourcing. A combination of approaches, including cap and trade, favorable tax treatment for efficiency investment, and a renewed focus on codes and standards may help align incentives and contribute to the reductions of greenhouse gases.