In the buildings sector, data enables decision-making. Organizations that measure and manage their energy use are more likely to implement energy efficiency improvements.1  Good data on commercial building energy use enables owners to compare themselves to their peers and can also allow them to earn energy efficiency labeling and differentiate their properties in the real estate market. Data is also critical to policymakers who formulate and analyze energy policy choices and track implementation.

Now, a critical source of data that forms part of the foundation of important rating systems for green buildings and building energy efficiency in the United States is falling out of date, possibly impeding efforts by policymakers and communities to provide building owners, tenants, and other parties with accurate information on energy performance.

The Commercial Building Energy Consumption Survey (CBECS), founded in 1979, has not published new data since 2003, and any further data collection under the survey has been placed on hold because of data collection errors and federal budget cuts. Meanwhile, interest in green buildings, energy efficiency and sustainable buildings has reached an all-time high.

The purpose of the CBECS

Commercial buildings account for about 20 percent of energy use in most countries. In the United States alone the energy market was $1.2 trillion in 2006, and in that year buildings used 18 percent of nation’s energy.

In the United States, the CBECS serves as the central repository for energy data on commercial buildings. The survey, conducted by Energy Information Administration (EIA) at the U.S. Department of Energy, includes data on the fuel consumption and energy intensity of commercial buildings, broken down by building size, age, principal building activity, region, climate zone and many other building attributes.

The CBECS is designed to be a representative sample of all commercial buildings in the nation with more than 1,000 square feet of floor space. The most recent survey results published in 2003 included 5,215 buildings. The CBECS defines a commercial building as an enclosed structure with more than 50 percent of its floor space devoted to activities that are not residential, industrial, or agricultural. The data is reviewed for statistical validity by analysts at the EIA and has been the cornerstone for many public policy and private-sector initiatives.

The CBECS was founded in 1979 because in 1978, the EIA began collecting basic statistical information about the three major energy end-use sectors – commercial, residential, and industrial – through periodic consumption surveys. Data was published every three years through 1995 and at four-year intervals thereafter (1999 and 2003).2

However, in May 2011 the EIA announced that the 2007 data set would not be published because of data quality issues, and that the 2011 data collection had been suspended. The program’s future is uncertain.

The value of CBECS data

Figure 1 provides a sample of the type of data the survey generates: It shows how commercial building energy intensity per square foot has varied over the life of the survey. 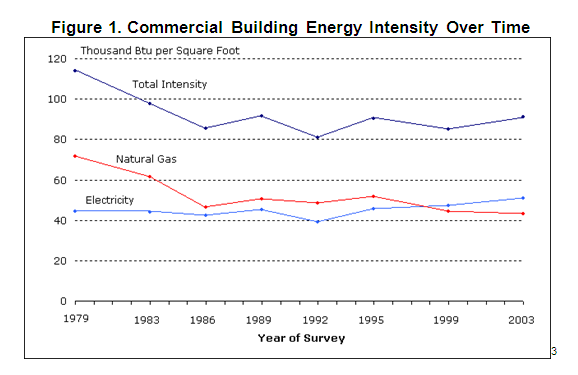 This and a great deal more CBECS data is the basis for many metrics, labels and policies for commercial buildings in the United States, including the ENERGY STAR program administered through the Department of Energy and the Environmental Protection Agency, which in turn provides of the basis for various other energy efficiency initiatives by governments, non-government organizations, and certification bodies. The aggregated CBECS data provides a foundation for differentiating among buildings. 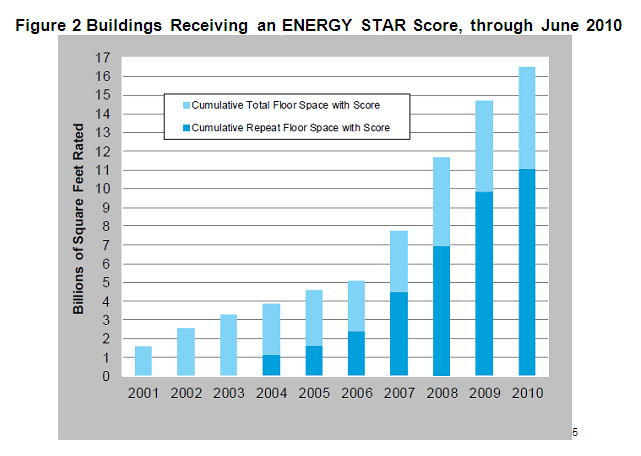 The ENERGY STAR score is not an absolute rating —instead, it benchmarks and ranks a building based on how that building performs against its peers. The energy use of a building’s peers is determined from the 2003 CBECS data, which allows tracking of one building’s performance against the average for similar buildings. This relative approach to performance makes the U.S. more dependent on updated data surveys.

In turn, ENERGY STAR  scores are the basis for the energy portion of the U.S. Green Building Council’s internationally recognized Leadership in Energy and Environmental Design (LEED) green building certification system.  There are 20,585 LEED certified projects today6, and many more projects register every day.

ENERGY STAR scores are also the metric used to evaluate building performance in the building energy labeling programs in New York City; Washington, D.C.; Austin, Texas;  and the states of California and Washington.7  In each of these programs, a building’s ENERGY STAR rating must now be disclosed, depending on the program, either in a public database or directly to prospective buyers, lessees and lenders before the closing of a real estate sale or transaction.

The CBECS is also the baseline for non-government initiatives like the 2030 Challenge, sponsored by the non-profit, non-partisan and independent organization Architecture 2030. This program sets the goal that all new buildings and major renovations be carbon neutral by 2030.

The consequences of old data

For all of these programs that depend on ENERGY STAR scores and CBECS data, the outdated 2003 building dataset is becoming an impediment to tracking progress in energy efficiency. These programs and tools help empower decision-makers, provide differentiation among buildings, and serve as a basis for rewarding strong performance. Data has the power to help shape markets. Yet, in the United States today, as in many countries around the world, good aggregated data is a scarce commodity.

2 “Where have all the data gone?  The crisis of missing energy efficiency data.”  Rachel Gold and R. Neil Elliot. ACEEE. February 2010.