Demand Response: Buildings as Power Plants on the Smart Grid

Changes in electric usage by end-use customers from their normal consumption patterns in response to changes in the price of electricity over time, or to incentive payments designed to induce lower electricity use at times of high wholesale market prices or when system reliability is jeopardized.1

Demand response is a critical component of the smart grid. In essence, demand response allows electricity users—in exchange for financial incentives—to reduce electricity use during times when the grid needs help. Some have compared the concept to a virtual power plant that produces “negawatts” – megawatts of avoided load that free up the grid in the same way as would a fossil fuel-fired generator.

According to a recent FERC report, eight percent of energy consumers in the United States are in some kind of demand response program and the potential demand response resource contribution from all such U.S. programs is close to 41 gigawatts, or 5.8 percent, of U.S. peak demand,2 with the potential to grow to twenty percent of peak load in next ten years.3

The Value of Demand Response

In areas where generation, transmission and distribution capacity is stretched thin, demand response can be a valuable means of keeping the lights on and smoothing out volatile electricity market prices.

Of even greater value, investments in demand response avoid the need to build new capacity – averting the heavy cost of new power plants, transmission lines, and substations, and limiting the growth of greenhouse gas emissions. Demand response could make a serious dent in the $1.5 trillion. The Brattle Group estimates would be required over the next 20 years to build new capacity under a business-as-usual scenario.4

Demand response is also a strong enabler for introducing more renewable energy into the world’s fuel mix while ensuring grid stability. In next generation utilities, widespread demand response will help to maintain demand/supply balance on a smart power grid, utilizing a radically greater percentage of variable-output renewable generation sources such as wind and solar power.

The best way to identify the benefits of demand response is the load duration curve, shown below. This graph shows the total system demand in the PJM region6 for all the hours in the year ranked in descending order.

The shape of this curve—consistent for electricity systems everywhere—reveals the value of demand response. Note that for only a small percentage of the total hours in a year, demand is much higher than the rest of the year. Even though peak conditions may apply for only one or two hundred hours per year, system operators and load serving entities today are forced to build infrastructure with enough capacity to supply the needs of these highest periods of demand (plus a little extra to be safe). In the diagram below, the difference between the electrical supply line and the demand line represents excess capacity--capacity which sits idle for most of the year.

Demand response is a voluntary reduction in electricity use by buildings, households and industry during the few hours with the highest system demand. The effect on the system is can be enormous. Imagine moving the horizontal line down in the chart below. Based on the data shown here, shedding load during the top 120 hours (20 summer days for six hours each) would eliminate the need for ten percent of the infrastructure that is required today. Some of the resulting cost savings could be directed to electricity consumers as incentives to reduce; the rest would be distributed over society in the form of lower cost energy. 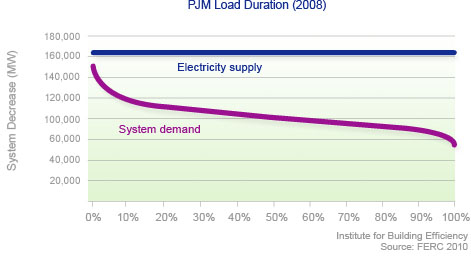 Most estimates place the benefits of demand response in the tens of billions of dollars for an electrical grid like that of the United States. Assuming an initial cost of $962 per kW for a combined cycle plant, a 10% reduction at peak hours can avert $680B in generation alone.

If demand response is such a cost effective strategy for our energy system, why isn’t it more common? As with many complex concepts that require deep structural changes, taking the real world steps necessary to realize the full set of theoretical benefits can be difficult. Barriers can come in the form of political, technical and behavioral challenges. Examples of these barriers can include:

Despite the challenges, demand response is a major building block of the smart grid and a potential source of large benefits to individuals and society. It should be pursued with full force as policies, technologies and behaviors align to unlock its full potential.