District energy is gaining attention for its ability to tackle large-scale, global energy problems on a local level, with local resources. District energy produces and distributes steam, hot water and chilled water directly to buildings through a network of underground pipes from a central plant, eliminating boiler and chiller rooms in individual buildings.[1]  Heating and cooling in this way is more efficient, more resilient, and emits less carbon into the atmosphere.

District energy can implement efficient utility-scale technologies while remaining flexible and reliable, cost-effectively meeting specific local and community needs. District energy systems are located close to thermal and fuel sources, heating and cooling loads, and distribution networks. This enables technologies like combined heat and power (CHP) systems, renewable energy, emissions controls and energy storage that would be too difficult or expensive to implement in individual buildings. A few of the world’s most impressive large-scale district energy systems were among this year’s IDEA award winners. They include:

Almost all 2013 IDEA award winners employ CHP (also known as cogeneration). CHP, which captures heat from electricity production and uses it to heat buildings or run chillers, is a common element of district energy systems. This technology is large enough to serve many buildings, but is located near the end users and can use local resources to power the system.

A number of the IDEA winners also utilize long-term energy storage technologies to smooth out daily and seasonal supply and demand and keep the system base loaded at all times. The ability to load and store electricity or thermal energy makes it easier to accommodate fluctuations in electricity production from renewable sources, making renewable energy installations more reliable. For example, the City of Marstal, Denmark, which won the award in the small community group, employs their “Sunstore” storage concept, integrating solar collectors, a flexible energy system and a long-term heat storage pit to provide district heat from 100 percent renewable sources. 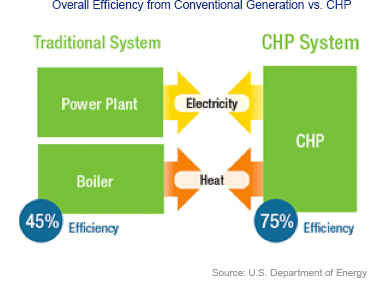 District energy provides superior efficiency and energy utilization, decreasing overall fuel consumption and carbon emissions. Conventional coal-fired power plants that supply utility-scale electricity operate at approximately 35 to 45 percent efficiency.[2]  This means some two-thirds of the fuel’s energy input is wasted and rejected into the environment.[3]  Losses of electricity in transmission and distribution processes are another source of inefficiency, accounting for 7 percent of the total electricity transmitted in the U.S.[4]  On the other hand, district energy aggregates the fluctuating energy patterns of all the users, allowing the load to be managed efficiently. In addition, most district energy installations employ CHP systems, which average 75 to 80 percent efficiency through the capture of waste heat from electricity production.[5]  Many of the IDEA winners saw district energy CHP system efficiencies in the 80 to 90 percent range. For example, Cornell University’s CHP plant achieved nearly 80 percent efficiency and uses 86 percent less energy by employing lake water instead of conventional chillers. What’s more, CHP systems typically use natural gas as the primary fuel source, producing roughly half as much carbon dioxide as coal-fired power plants.[6]

District energy system efficiencies are especially evident when energy consumption remains the same or decreases even as a campus or community grows significantly. For example, Texas A&M University, which won an award for its campus-wide district energy system, experienced growth of 4.5 million square feet from 2002 to 2012, while its energy consumption decreased by 1.8 million MMBtu and emissions by 24 percent. Helsingin Energia, the energy company in Helsinki, Finland, and winner of the IDEA award in Expansion, reported that while its total energy production is increasing, they are seeing 50 percent savings in fuel costs and 35 percent fewer emissions per year when compared to conventional heating and cooling systems.

District energy systems can use a variety of fuel sources, and this flexibility enables them to use lower-carbon, local sources of energy, increasing the resilience and security of these microgrids. Several of this year’s IDEA award winners take advantage of this flexibility to use different clean, local or renewable sources of energy, cooling and heating.  For example:

The high overall efficiency, the ability to integrate clean, renewable sources of energy, and the direct transmission of heating and cooling to the end users allow district energy systems to have a huge impact on decreasing carbon emissions. The IDEA winners show just how substantial the greenhouse gas (GHG) reductions can be annually:

Resiliency to the effects of natural and manmade disasters is of growing concern for organizations and building operators. Resiliency refers to “the ability to maintain operations despite a devastating event.”[7] Grid outages are expensive and cause turmoil, and utilities are at risk for outages due to ever- increasing weather events, such as Superstorm Sandy in 2012.

District energy CHP microgrids are small-scale, local distribution systems that link multiple distributed power sources into a network.[8] Microgrids can operate with the regional or local utility grid, or independently in “islanded” mode. Because these islands can operate separately from the grid, they are highly reliable and resilient in the face of catastrophes or grid failures. These systems allow organizations to “blackstart” and self-sustain heating, cooling or electricity production during an emergency or power outage at the grid level. Cornell and Texas A&M can operate independently as islands to supply power to the campus in the event of a grid outage and can blackstart their campus’ CHP loads. The city of Aberdeen, Scotland, and the City of St. Paul, Minnesota, are developing projects to connect the energy islands and thus serve larger areas over time.

Due to the ability to island, blackstart and use a variety of fuel sources, most district energy systems can maintain extremely reliable service. For example, IDEA award winners City of St. Paul and Qatar Cool projects — both in harsh, demanding climates — have reported greater than 99.99 percent heating and cooling reliability since the establishment of their district energy systems.

District energy is not a new concept. Texas A&M, for example, has been generating on-site power since 1893. But the need to proliferate this technology is increasing as organizations and localities strive to address global concerns about climate change, energy security and resiliency.

According to a May 2011 report by the International Energy Agency, heat represents 47 percent of final energy consumption globally,[9]  yet district heating supplies only 6 percent of global heat demand today.[10]  District energy is being grossly underutilized as a means to address the large portion of global GHG emissions that come from heating and cooling. The winners of the IDEA awards have demonstrated that district energy can be done in sizes ranging from university campuses to large cities, while saving money, saving energy, reducing GHG emissions and improving resiliency.

[10] “The CO2 Emission is a Problem for All of Us.” District Energy Partnership. http://www.districtenergypartnership.com/da-DK/THE-PROBLEM.aspx