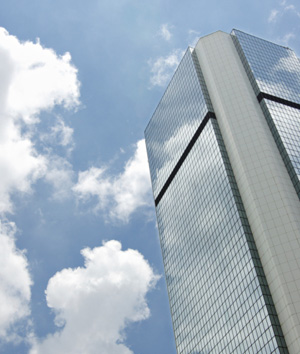 With China’s national energy use recently surpassing that of the United States and rising rapidly, energy efficiency in that country has become a high priority.1 Recent efforts by the Chinese government have sought to reduce energy consumption, with an emphasis on improving the efficiency of buildings. China’s National Development and Reform Committee (NDRC) has identified three priorities for buildings:2

Conservation efforts in China have traditionally focused on reducing energy intensity: total energy consumed divided by the national economic output (GDP). Despite decades of economic growth, energy intensity in China declined between 1970 and 2000. But as economic growth accelerates, the trend has reversed, and energy intensity has begun to grow, averaging 3.8% between 2002 and 2005. To bring energy intensity back down, the Chinese government has established a suite of policies, many affecting the energy efficiency of buildings. The 11th Five-Year Plan3 calls for a reduction of 1,709 million tons of coal equivalent (Mtce) in energy use, of which 563 Mtce is to be achieved through policies and programs at the national level. About 20% of this reduction is sought in buildings, where efforts concentrate on building envelopes, lighting and heating, ventilation and air conditioning.

Buildings are a logical place to start when it comes to curbing energy growth. With an estimated two billion square meters (21 billion square feet) of new buildings being constructed per year, buildings are already a major contributor to China’s overall energy use (28% today compared to only 10% 30 years ago).4 As buildings continue to go up and the standard of living increases, this sector will be even more important in coming decades.

China has implemented a broad portfolio of policies that will change building energy use, including mandatory codes for new construction, voluntary labeling systems, and new metering requirements. A recent report by the China Energy Group at Lawrence Berkeley National Laboratory (LBNL) summarizes building-related and other energy efficiency policies in China.5

Development and Enforcement of Building Codes – With a target of improving efficiency in new buildings (both residential and non-residential) by 50% compared to older buildings, China has established a set of technical specifications about the quality of construction materials and building equipment, mandating increases in market share for new wall, roof and insulation materials. For commercial buildings, indoor air temperature is limited to 20o C (68o F) in winter and 26o C (79o F) in summer.6 In some provinces and cities, the codes are even more aggressive, expecting an efficiency improvement of 65% compared to older buildings. While the relative improvements are large, recent comparisons of heat transfer through walls and windows find that buildings currently at code in Beijing lose heat three to five times faster than code-compliant buildings in Canada or Japan.7

As others have experienced, China has had problems in the past with low compliance levels. However, recently released data suggests that compliance with code is now above 90%, possibly attributable to a strict policy that strips contractor of their license if a project is found to be in violation of code. The effectiveness of building codes in reducing energy use is further complicated by behavioral effects: building occupants today expect more space conditioning, lighting, and other services compared to a decade ago, so that even a building at code can use more energy than less efficient predecessors.

Three Star Building Labeling System – Similar to leading rating systems such as BREEAM and LEED, the Chinese government-sponsored building labeling system (colloquially referred to as Three Star), addresses the energy use and overall environmental impact of a building. Three Star differs in an important way, however, in that it extends beyond the building design to measure performance and award efficiency labels only after a year of operation. This requirement narrows the gap between expected and actual performance, a problem attracting increasing attention all over the world.

Heating Metering and Reform – In the northern, colder region of China, space heating accounts for a significant fraction of energy used in buildings. Historically, large semi-private companies have provided hot water to buildings from district coal-fired boilers. Building owners passed on the costs to tenants, dividing the total according to occupied floor space, not actual energy use. However, recent legislation has called for metering of hot water usage by individual tenants, providing a financial incentive to reduce consumption. The rollout of meters comes in conjunction with new pricing structures that charge tenants for the energy they actually consume.

Retrofits – With a growing stock of inefficient buildings, China has identified vast potential through the retrofit of existing floor space. The goal for these projects is to bring existing buildings to the level of code-compliant new buildings, often involving energy reductions of 50%. In the last year, the government has set aggressive targets for energy retrofits, providing education, technical resources and financial incentives for two main categories of retrofits:

Through aggressive policies, China is setting the stage for substantial and lasting efficiency improvements in its building stock.

5All statistics referenced in this paper are derived from the LBNL report, with contextual information from Chinese government sources.