Energy and Buildings in India: Setting a Course for Efficiency

With a population of 1.1 billion people and one of the fastest-growing economies in the world, India is experiencing a rising demand for energy. This growth has presented a challenge to the energy infrastructure, as evidenced by some startling statistics from the Central Electricity Authority’s Load Generation Balance Report 2010-2011.  This assessment of the country’s anticipated electric power supply and demand for that period found that, nationwide, available energy is projected to fall 10.6% short of overall needs, and energy supplied during peak periods will fall 12.1% short of demand.  This projected imbalance between supply and demand foretells a major reliability problem and an uncertain climate for consumers and businesses in need of power.

In addition, India’s rising greenhouse gas emissions have led to increasing scrutiny of the country’s energy system. According to the International Energy Agency, India’s emissions are expected to nearly triple between 2007 and 2030, growing from 4.5% of the world’s emissions today to 8.5% over the next two decades.

One driver for this increase in energy use and carbon generation is the growth in building stock expected over the coming decades. Based on forecasts of building construction, it is estimated that about 70% of the floor space that will exist in India in 2030 has yet to be built. This trend stands in stark contrast to developed economies like the United States, where new construction is expected to proceed at a much more gradual pace and represent a much smaller percentage of overall floor space. 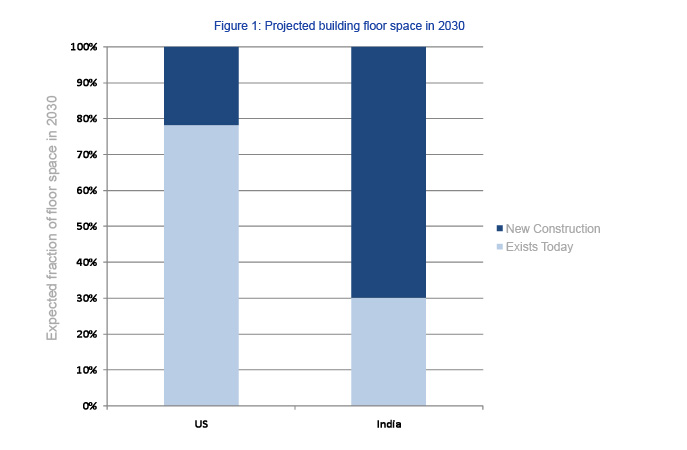 As in other rapidly developing economies, Indian homes and businesses will continue to demand more energy to fuel greater productivity and a more comfortable standard of living. Exploding construction raises the specter of significantly higher greenhouse gas emissions and an increasing strain on the energy system; but it also presents a significant opportunity to implement efficiency in new buildings, where it is the least costly.

There are several initiatives underway to take advantage of this opportunity – combining supporting research, innovative programs, and effective policies to improve the efficiency of the built environment in India. Two of the most prominent efforts are the creation of the Government of India’s Bureau of Energy Efficiency and the launch of the India-U.S. collaborative ECO-III Project (http://www.eco3.org).  These two entities have often worked closely together and, with input and support from dozens of academic institutions and advocacy organizations around the world, have laid the groundwork for significant improvements in the efficiency of Indian buildings.

The Government of India institutionalized a national effort to increase efficiency with the release of the Energy Conservation Act in 2001. In addition to authorizing the Central and State Governments to mandate energy efficiency, this legislation created the Bureau of Energy Efficiency (BEE) – formally established in 2002 – and authorized it to support energy efficiency at the national level.  The BEE provides research and support for national policy and drives communication initiatives promoting energy efficiency.

The Energy Conservation and Commercialization (ECO) Program was established in 2000 as a collaboration between the Government of India and the United States Agency for International Development (USAID).   The ECO-III Project emerged under this program in 2006, and since its launch has promoted energy-efficient technologies and approaches to assist India’s greenhouse gas reduction efforts. Current activities include capacity building (i.e. training, tool development), development of research institutions and industry associations, supporting states in implementing energy efficiency programs, and public outreach.

BEE and ECO-III have collaborated on several key efforts to advance the efficiency of buildings in India. The two most important initiatives are:

These and other initiatives signal that India is serious about enhancing building efficiency as one important way to address power supply-demand concerns and control greenhouse gas emissions.