For many property owners, owning clean energy equipment doesn’t matter. Obtaining clean energy from the equipment does. So long as the owner gets to soak up the energy from the solar system on the roof, or realize reduced operating costs from a highly efficient chilled water plant, it does not matter that the equipment belongs to someone else. A variety of third party ownership structures exist that allow property owners to avoid the purchase price while still reaping the rewards.

Third party ownership structures can be attractive for a number of reasons. They can:

The following are some of the more popular third party ownership structures:

A variation of the conventional loan is the shared savings model, applied as part of a Performance Contract. In the shared savings scenario, the energy service company (ESCO) enters into a performance contract with the building owner and implements an energy efficient program. The ESCO is paid for its services and equipment from the energy savings realized from implementation of the program. Ownership of equipment transfers from the ESCO or finance partner to the building owner at the end of the contract.

The contract is advantageous to the owner, who fronts no costs and pays for the program through the guaranteed energy saved following implementation. The arrangement is low-risk for building owners, while giving ESCOs strong incentives to design for maximized savings (rather than some minimum level of performance, as might be the case if the owner merely purchased equipment from a vendor). The disadvantage of this model is that it requires precise and transparent measurement and verification of cost savings, the absence of which could lead to contract disputes between the owner and the ESCO.

In the most common form of PPA, a building owner allows a third party to install a solar photovoltaic system on its property and agrees to purchase the power produced (and the environmental attributes) for a fixed price and term, typically 10-25 years. The building owner benefits from a low and stable electricity price, a smaller carbon footprint, and a highly visible renewable energy technology on their premises. Additionally, the third-party owner can monetize the tax credits or renewable energy credits associated with the system’s production to create additional value for the building owner. This model can be very useful for tax-exempt institutions in the public sector, who would otherwise not be able to take advantage of federal investment tax credits (ITC) for renewable energy systems.

In another PPA application, a company might hire an energy service company to install a high-efficiency central heating and cooling plant and agrees to buy the chilled and heated water. In this scenario, the savings can be substantial when compared to energy use by old, inefficient plants.

For a more detailed look at power purchase agreements, see: 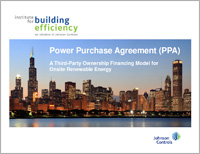 Similar to the prior two models, under a DBOOM structure the third-party leases the services provided by the system back to the building owner. The third party is responsible for designing, building, monitoring, maintaining, and ensuring the overall performance of the system. This model helps customers pay for a system with operating dollars rather than capital dollars, and account for the payments as a rental expense.