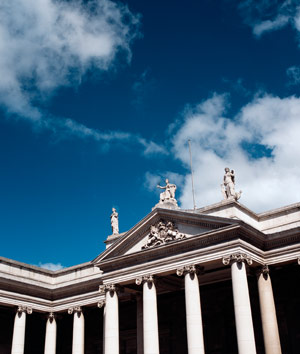 These are modest project volumes and investments, but they demonstrate that mortgage holders will consent to senior PACE liens2, relieving a concern that has discouraged broader support for PACE. The mix of national, regional, and local lenders that have given consent for existing PACE programs recognize that the seniority of the PACE lien presents minimal risk to their position as the primary mortgage holder: Only one year of outstanding PACE payments sit in front of the mortgage in the event of foreclosure, and the new property owner then assumes the remaining PACE payments. Lenders also perceive that efficiency and renewable energy upgrades that bring immediate energy bill savings leave property owners in a better position to service their existing debt.

This year, several major cities are set to launch programs and test whether PACE can be a scalable solution for local governments looking to increase efficiency upgrades in the private sector. Achieving scale may take some time, and large-scale adoption of PACE will rest in part on an ability to pool individual assessments and those of multiple programs to create a PACE asset class among investors. Commercial sector PACE programs are emerging in different areas of the nation, including Ann Arbor (Mich.), San Francisco and Cleveland. Government administrators are engaging local stakeholder groups – including lenders, building owners and contractors – in the program design process and are coordinating extensive market outreach before programs officially open to applicants. Here is a brief update on some of the key design elements of anticipated programs from Los Angeles, San Francisco and Washington, D.C. For more detail on the different components of Commercial PACE programs, including recommendations for best practices, see Unlocking the Building Retrofit Market: Commercial PACE Financing.

Los Angeles County, which will have the first major urban program out of the starting gate in 2011, is in the midst of heavy market outreach to commercial building owners. The county will use ARRA funds to provide no-cost energy audits to building owners and will require recipients to implement measures with less than a three-year payback. As a way to bring in more private capital, the county is using the owner-arranged financing approach, which enables building owners to leverage the security of the PACE lien and establish terms with lenders independently. Los Angeles will also require a minimum efficiency gain before on-site generation may be funded through the PACE structure. Qualifying projects must also achieve a minimum level of savings based on the building’s ENERGY STAR score. For example, projects in buildings with an ENERGY STAR score of 60 or lower must produce at least a 20 percent efficiency gain. The program intends to accommodate customers with different levels of technical expertise and at different stages in the retrofit process. The program includes a fast-tracked approach where a building owner has a project already designed and a financier selected, assigning the PACE lien as a last step. A more supported path begins from the audit and enables the building owner to receive program guidance throughout. The debt service reserve fund (DSRF) can be used on a project-by-project basis at the lender’s discretion.

San Francisco is also expected to launch a Commercial PACE program in summer 2011. Many elements, such as a minimum savings requirement or a loading order that assigns efficiency a higher priority than on-site power generation, are still to be determined. However, as in Los Angeles, the program will take the owner-arranged financing approach and allow lenders to opt in to a DSRF. Reserve funds in both programs use ARRA funds, and projects that take advantage of that option must meet federal grant conditions (such as reporting and Davis-Bacon prevailing wage requirements). San Francisco expects underwriting requirements and performance risk guarantees to be determined by project participants – lender, contractor and building owner – rather than by the administrator. While the Los Angeles program uses no-cost audits to help spur demand for PACE, San Francisco will benefit from its 2011 Existing Commercial Buildings Energy Performance Ordinance, which requires buildings larger than 10,000 square feet to conduct an energy audit every five years and benchmark energy performance annually3. The expectation is that if building owners know where they stand in terms of energy usage and where they can improve, they are more likely to pursue efficiency upgrades.

The Washington D.C. program is in its early stages but already has $250 million in approved bonding capacity and recently finalized a contract for a program administrator. As of summer 2011, the city was working closely with the local community to match program offerings with stakeholder needs. Program administrators are working to determine the best financing approach for the city’s building stock and are considering a loading order for efficiency improvements and renewable energy installations. The city has several unique advantages that increase the likelihood of a successful PACE launch. These include: 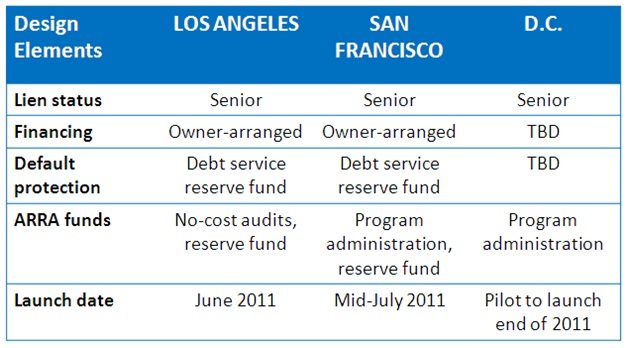 Government officials, businesses and stakeholders alike are watching to see how each of the programs evolve and whether certain design choices are more advantageous in different local market conditions. If successful, these programs have the potential to reintroduce PACE as a vehicle for upgrading buildings in urban areas.

2PACE liens are senior to all other obligations on the property, including the existing mortgage.

3Properties larger than 50,000 square feet must file benchmarking reports with the city beginning in October 2011. After the first year’s reporting requirement, energy performance data will be made public. Similar requirements for buildings ranging from 10,000 to just under 50,000 square feet will begin in 2013.