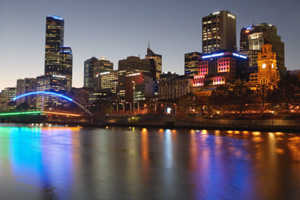 The City of Melbourne has created a new program for financing energy retrofits in commercial buildings, using a variation of the property-assessed clean energy (PACE) financing model in the U.S. Melbourne’s program has some important features that cities and countries around the world may be able replicate.

As part of its Zero Net Emissions by 2020 Strategy, Melbourne has launched a 1200 Buildings Program that aims to retrofit 1,200 existing office buildings, about two-thirds of the city’s building stock, to reduce energy use, save water, and lower carbon emissions. To kick-start that initiative, the Victorian Parliament passed an amendment to the City of Melbourne Act on Sept. 14, 2010, allowing the city council to administer a commercial building retrofit financing model.

The council may now enter into Environmental Upgrade Agreements (EUAs) with commercial property owners seeking upfront financing for projects that improve energy, water and environmental efficiency, and with the financial institutions willing to fund those retrofits.

Upon approval of the EUA, the lending body advances funds to the building owner to undertake the project. The owner or occupier pays an ongoing Environmental Upgrade Charge (EUC), levied by the council, that essentially matches the principal and interest. The payments are then passed on to the lender. Lenders have security because an unpaid charge transfers to the property, is subject to penalty interest rates, and can be recovered.

Melbourne’s program is likely to be supported by the Australia Carbon Trust, which has sought interest for co-investment in “flagship” retrofit projects and programs that scale up existing government programs. The Carbon Trust has made $75 million available across Australia and expects that amount to be augmented through innovative private-sector investments, such as revolving loan funds and alternative structures that demonstrate positive return on investment (ROI). The end result will be to maximize the impact of GHG emissions reductions from non-residential buildings. The government estimates that in the first wave of investment the fund will stimulate more than $500 million nationally in energy-efficiency projects.

Melbourne’s building retrofit program will target non-residential properties and has some important features that make it especially promising and robust. Instead of the “pooled-bond” funding mechanism seen in many first-generation PACE programs in the U.S., Melbourne will use an owner-arranged financing model. This allows property owners to seek out a commercial lender independently to secure attractive rates and terms specific to the project, with assurance of the EUC from the city council. In addition, the Melbourne approach is unique in targeting portfolios of properties instead of single-building retrofits alone.

In its first phase, the Melbourne program will target top-tier property owners who:

The last criterion promotes comprehensive retrofits rather than simple, piecemeal improvements that may eliminate the potential for cost-effectively reaching deeper levels of savings later on.

While these conditions limit participation to 35 percent of the city’s building stock, they will enable a rapid launch with lower administrative costs and better likelihood for long-term success. Early projects will provide case studies and technical resources that will widen the market later. The Deloitte financial consulting firm estimates that a successful 1200 Buildings Program will create up to 8,000 green jobs and generate up to $2 billion of private-sector investment in Melbourne over 10 years.

Commercial building retrofit financing programs can unlock significant levels of private investment, job creation, and carbon emission reductions. While the PACE model developed in the U.S. has lost some of its early momentum due to concerns with implementation in the residential sector, programs like Melbourne’s reinvigorate the early model with new best practices for commercial buildings.

Get the latest update on PACE financing in the United States.