The City of Melbourne is using a unique set of complementary strategies, including national, provincial and city government policies, to improve the energy efficiency of its commercial buildings and achieve carbon neutrality by 2020. To date, Melbourne has implemented:

Fifty percent of Melbourne’s GHG emissions are generated by the commercial sector. Policies and programs that encourage energy efficiency in commercial buildings are a key part of the city’s strategy to help reach its goal of carbon neutrality by 2020. The city plans to reduce energy use by taking efficiency measures, increasing energy sourced from renewable generation, and offsetting the remaining emissions. If commercial buildings improve their energy efficiency by approximately 38 percent, 383,000 tons of carbon dioxide equivalents (CO2e) will be eliminated per year.1

Melbourne established the 1200 Buildings Program in 2010 to retrofit 1,200 of its existing office buildings, or 70 percent of the office buildings in the city, as a key strategy to meet its goal to be carbon neutral by 2020. The program is a voluntary initiative that encourages building owners and managers to improve the energy and water efficiency of their commercial buildings by providing them with information, tools, and training.  Program participants agree to:

Energy efficiency mandates for government buildings can be powerful market builders.  The market leverages the experience of retrofitting public buildings to support efficiency efforts for other sectors, such as commercial buildings. The Australian province of Victoria, working with the capital city of Melbourne, has developed the Greener Government Buildings (GGB) program. It aims to reduce GHG emissions, energy costs and water use across the majority of existing government buildings, including schools, universities, hospitals, and offices.

Using an energy performance contracting (EPC) process, energy services providers (analogous to energy service companies or ESCOs, in the U.S.) identify and install cost-effective energy and water efficiency solutions and provide a guarantee on energy savings in government buildings. By 2012, government departments were required to implement EPCs at sites accounting for 20 percent of their total energy consumption.  This number increases to 90 percent of total energy consumption by 2018.

As of October 2012, 13 GGB projects are in progress. Early results indicate the potential to deliver savings (energy, greenhouse gas and water) of more than 30 percent, and some as high as 60 percent, while maintaining a cost-effective return on investment of at least 12 percent.2 Over the course of the program, the GGB is projected to reduce the government's GHG emissions by at least 20 percent by 2020 and deliver more than $1 billion in accumulated cost savings.

Using 12 months of verifiable performance information, such as energy bills, water bills, and a waste audit, NABERS assigns buildings a star rating on a scale from one to six stars using benchmarks that are representative of the performance of other similar buildings in the same location.  A 6-star rating demonstrates leading building performance, while a 1-star rating means the building is lagging in performance and has room for improvement.

The NABERS program has been in place for more than 10 years to help property owners, managers and tenants in Australia improve the performance of their buildings, while benefiting from the operational savings and increased value that are consistent with waste, water, and energy efficient buildings.

In Melbourne, the city has adopted specific rating requirements for its buildings. Office buildings with more than 2,000 square meters (21,500 square feet) of gross floor area are required to commit to achieving a 5-star rating.

A complement to the NABERS rating system is the Commercial Building Disclosure (CBD) program. Established in 2010, it is a national program that requires building owners who are selling or leasing office space of 2,000 square meters or more to obtain and disclose a current Building Energy Efficiency Certificate (BEEC). A BEEC includes: 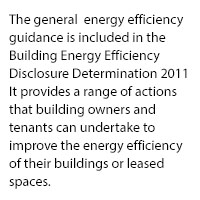 Melbourne developed a finance mechanism under its 1200 Buildings Program to help address the energy funding challenge. The Environmental Upgrade Finance (EUF) allows the city to partner with financial institutions to establish voluntary agreements with building owners that will finance environmental upgrades in commercial buildings. The funds provided by the lender are recovered through an ongoing charge linked to property tax charges, known as the Environmental Upgrade Charge. This mechanism reduces the risk faced by the financial institution that there will be a default on payments.  Three environmental upgrade agreements have been signed, and another 150 buildings are considering or in the process of retrofitting. 5

Funding for efficiency investments is an ongoing barrier to completing building retrofits. In the 2012 global Energy Efficiency Indicator (EEI) survey, financial constraints continued to be the major barriers to pursuing energy efficiency for Australian respondents, as in the U.S. and Canada. The top barrier to pursuing energy efficiency in Australia (Figure 1) was a lack of funding to pay for improvements (29%), followed by uncertainty regarding savings and performance (18%).6

Barriers to Energy Efficiency in Australia: 2012 and 2011 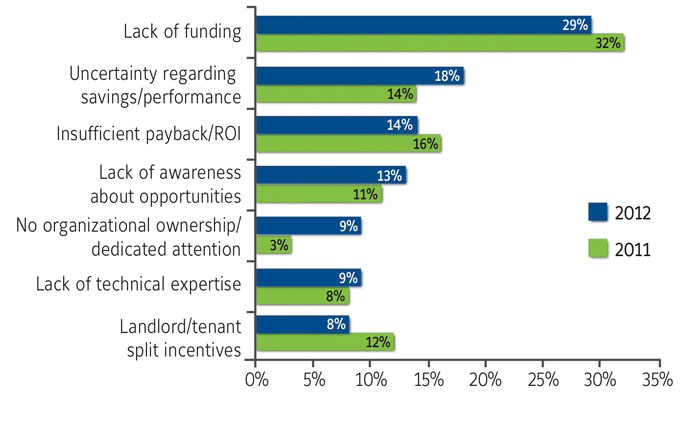 Incentives and rebates can also change the financial attractiveness of energy efficiency investments.  The Province of Victoria has developed an energy savings certificates (ESCs) program designed to provide financial benefit for energy efficiency investments.  The Victorian Energy Efficiency Target (VEET) scheme is a tradable certificate scheme to improve energy efficiency, reduce emissions, and promote investment, employment and innovation in energy efficiency industries. 7 Under the program, accredited installers provide discounts and special offers on selected energy saving products and appliances to households and businesses.  Installers convert the energy saved by implemented efficiency projects into Victorian Energy Efficiency Certificates (VEEC). These credits represent the avoidance of a defined amount of energy due to the equipment replacement (for example, a highly efficient air conditioner may replace an inefficient older system and the certificate and incentive is provided based on the kWh of electricity saved).  Energy efficiency certificate programs have been used in some U.S. states, Italy and elsewhere by utilities and regulators seeking to generate energy savings and incent investments in efficient equipment.

Melbourne has implemented a core set of policies for buildings to encourage significant improvements in energy efficiency and greenhouse gas performance.  Key innovations include:

These initiatives will support Australia’s 80 percent GHG emissions reduction goal and carbon neutrality for Melbourne. They will also create incentives for private investment in the building stock, improve building performance and benefit the people of Melbourne by providing local jobs and more desirable workplaces.