A Second Look at Green Buildings: The Rise of Certifications around the World

Green building is on the rise around the world, through a mix of voluntary certification and mandatory requirements.  Once an area dominated by the prevalence of new construction, the green building landscape is looking increasingly familiar: in existing buildings.

In 2008 the United States Green Building Council (USGBC) redefined its existing buildings approach to focus on whole building energy performance.  That year, a repositioned standard, LEED for Existing Buildings: Operations and Maintenance (EBOM), was released - requiring whole-building energy metering and one year of energy performance reporting into the United States’ Environmental Protection Agency’s Energy Star Portfolio Manager tool prior to certification.1  Since then, the existing buildings category of LEED-certified buildings has experienced an explosion (See Figure 1). 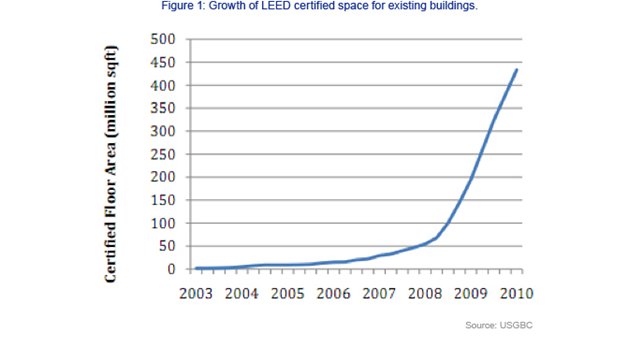 The overall LEED rating system has expanded its international presence at an unprecedented level – approximately 40 percent of LEED-registered projects and half of LEED-EBOM projects are located outside of the United States.2  For developed countries, the focus on LEED-EBOM certification stems from the opportunity to reduce building operational costs, as economies have shrunk and budgets have slimmed.  For developing countries experiencing rapid economic development, there could be a tendency to focus only on new building construction - but recent data from the 2011 Global Energy Efficiency Indicator (EEI) study confirms that developed and developing countries, alike, are pursuing energy efficiency in existing buildings and seeking third party verification (See Figure 2).  In fact, this is the first year that the EEI results have shown a higher proportion of existing building certification over new construction.  One-third of the survey responses show that building owners are incorporating green building elements without certification. 3 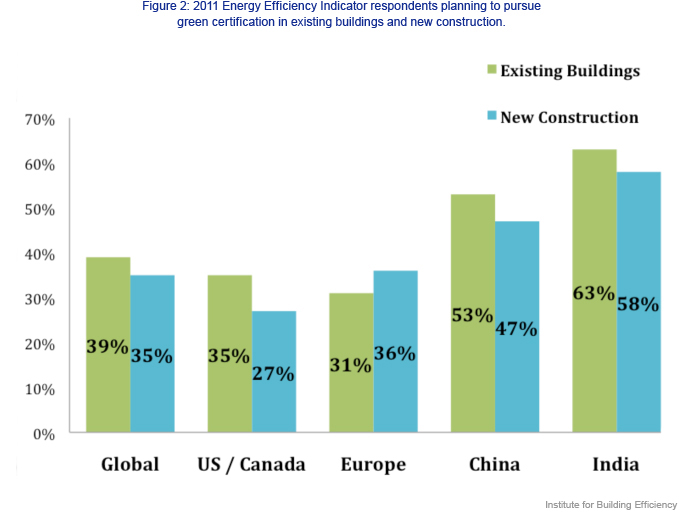 Growth in green building interest can be seen through the increase in registration for LEED-EB certification.  According to the USGBC, The percentage of LEED projects in Great Britain that are certified in the existing buildings category is only 9.1 percent; however 61.6 percent of the projects under registration fall into the LEED-EBOM standard.  Brazil boasts three times as many LEED-EBOM registered projects as certified, Colombia shows a sevenfold growth, and Japan – with no existing building certifications – has 19 percent of its LEED registered projects in the LEED-EBOM category (See Figure 2).4

To what can this explosive international growth be attributed?  There are certainly a multitude of factors, including:

The market for green is growing even in the wake of a global recession as LEED and other building standards are becoming a regular demand by tenants and building owners.  In both developed and developing economies, existing building assets have been given an extended life through the explosive growth of LEED-EBOM certification and registration in the past three years.  Several factors are driving this demand and there is no prediction that this growth will subside in the coming years – differentiation and efficiency drive value, no matter the location.

4 All LEED registration and certification data as per www.usgbc.org on June 27, 2011.