The U.S. Energy Information Administration (EIA) estimates that approximately nine percent of electricity generated in the U.S. currently comes from renewable resources.1 EIA projects that power generation from renewable resources will grow at about 3.3 percent per year through 2035 – roughly the same rate at which EIA estimates overall demand for electricity in the U.S. will grow over the same period.2

Many businesses and organizations are considering incorporating onsite renewable energy technologies into their new construction or retrofit projects, according the Institute’s annual Energy Efficiency Indicator survey of over 1,400 decision makers responsible for managing energy use within commercial buildings. Solar photovoltaic systems are under consideration by about one-third of respondents. Other commonly considered technologies include solar hot water (20%), geothermal (14%), and wind (13%). In Johnson Controls’ whole-building retrofits business, renewable energy technology systems are installed in about one out of every ten projects.

Among the major renewable energy technologies currently in use are:

Biomass refers to all trees, grasses, crops and other living plant materials. These plant materials can be burned in their solid form to generate electricity or heat buildings, or can be converted to liquid and gaseous fuels. Biomass sources that are most commonly used to produce energy include:3

Organizations with a significant and ongoing need for heat are often ideal candidates for biomass renewable energy projects. While some local utility rates make generation of electricity from biomass financially unattractive, biomass can economically provide heat for industrial processes, hospital laundries, university central plants or other similar facilities – while producing electricity that can be sold to a utility to generate additional revenue.

For more on the energy implications and environmental impacts of biomass, see: How Biomass Energy Works.

Wind energy is one of the fastest growing renewable energy sources in the world4. Wind is produced by differences in the rates at which the earth’s land and water surfaces heat up and cool off, so this energy resource will continue to blow as long as the sun remains in the sky. Average wind speeds of between 7 and 9 meters per second (roughly 15 to 20 miles per hour) are ideal to today’s utility-scale wind turbines suitable for commercial applications such as schools or government facilities. Accurately measuring average wind speed through a wind resource assessment is critical to assess project feasibility.

In addition, wind turbine projects require a variety of studies, permits, and agreements including:

Wind power is currently one of the most cost effective renewable energy technologies. According to the Berkeley Lab database of sales prices, the 9,873 MW of wind projects in 2008 had an average sales price of about $0.04/kWh.5 Community wind power projects – defined as projects using turbines over 50 kW in size and completely or partly owned by commercial customers, schools, local governments, or farmers, constitute only about two percent (by capacity) of these wind power projects completed in 2008.

Solar photovoltaic panels are made up of semiconductor materials that release electricity when exposed to light. Solar photovoltaic systems collect sunlight and convert these bursts of electricity into usable power. This renewable resource will be available as long as the sun shines, and is virtually emission-free.

Important factors to evaluate when considering a solar photovoltaic system installation include:

High costs are a major barrier to achieving rapid growth rates in the adoption of solar PV power. Fortunately, costs have been falling over time with scale and learning through cumulative production. The chart6 below is one estimate of the breakdown of the total installed cost of a typical crystalline silicon-based solar photovoltaic system in US$ per Watt of peak capacity. 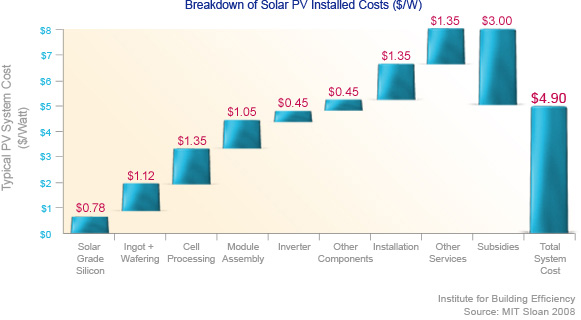 Large cost reductions can be wrung out throughout the solar value chain through lean manufacturing, economies of scale, integrated design, and other learning effects. Historic cost reduction with cumulative production of solar cell components between 1975 and 2005 is shown in the graph7 below. Some analysts estimate installed costs can be cut by a factor of two or more.8 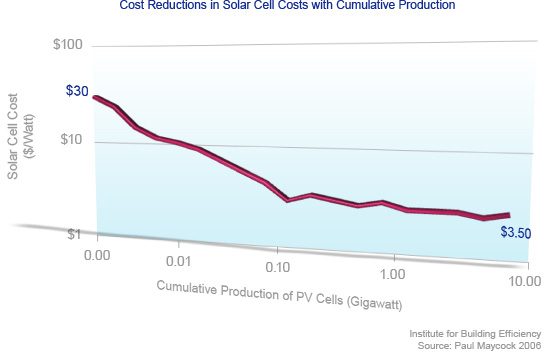 For more information on PV solar and its potential to improve the sustainability of the built environment, see the article on “Solar-Powered Buildings.”

In contrast to solar PV technology, solar thermal systems generate energy by absorbing the heat of the sun with collecting devices such as flat-plate solar energy collectors. Air or a heat collecting fluid such as water or antifreeze passes through tubes within the collecting devices where it is warmed and then distributed to the appropriate heating system. The collector system transfers heat to a hot water storage tank, a swimming pool, the building’s plumbing system, or is used directly to heat air in the building. 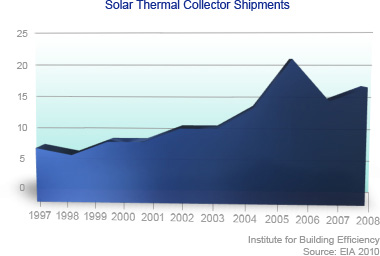 Simple paybacks on solar thermal systems can be as low as seven to ten years. Solar thermal systems are most financially attractive to organizations that have significant demands for hot water such as commercial kitchens, laundries, car washes, and facilities with swimming pools. In the U.S., the economics are also improved by a 30 percent tax credit for solar water heating created by the Energy Policy Act of 2007.

Ground source heat pump technologies, also known as geothermal or geoexchange technology, are both an energy efficiency technology and a renewable energy technology.

Just a few feet below the surface of the Earth, the temperature of the ground changes little from season to season – remaining at between 45° and 75°F, depending on latitude. In winter, this source of relative warmth is used as a renewable resource to heat buildings and hot water. In summer, the relatively cooler ground is used as a heat sink to improve the energy efficiency of heat removal from buildings. Summertime provision of hot water also comes at virtually no cost using geothermal.10

Geothermal heat pump systems are made up of three basic components:

Buildings can typically achieve higher levels of energy efficiency using geothermal heat pump systems in conjunction with radiant heating and cooling, using pipes run throughout a concrete slab to both heat and cool the building.

To evaluate the feasibility of a geothermal heat pump system, qualified experts must determine the type of system suitable to the application based on a number of different factors:

Ground source heat pumps are also well-suited for buildings in which heating and cooling systems run simultaneously for all or part of the year. Because heat pumps are modular, they can be installed in many locations in a building, making geothermal heat pumps an ideal renewable energy technology for office buildings, schools, multi-residential, and other facilities where extensive local control of room temperature is desired. When ground source heat pumps are combined with other sources of renewable energy, it is even possible to achieve a net zero energy building – one that produces all the energy it needs onsite.

4 U.S. Department of Energy (2009) “Advantages and Disadvantages of Wind Energy.”