In China and Beyond, Action Plans Provide a Path for Improving Building Efficiency

The city of Shenzhen in China has developed an action plan as part of it’s 5 Year Plan to strategically improve efficiency in buildings. Photo by Byoung Wook/Flickr.

On February 23 the World Business Council for Sustainable Development (WBCSD) launched the Energy Efficiency in Buildings laboratory (EEB Lab) in Shanghai. In a city where 18.4 percent of emissions come from buildings, the EEB Lab is engaging local stakeholders to analyze market barriers and discuss solutions for energy efficiency in buildings. During a three-day launch workshop, experts developed a plan to organize action within Shanghai’s private sector and, in part, help implement the 2016-2020 Shanghai Five-Year Plan for buildings.

Unique to China, Five-Year Plans (FYPs) are blueprints that central, state and local governments draft and implement to guide social and economic development. Since 1995, the national government has focused on energy efficiency in buildings in its FYPs, and sub-national governments have followed suit since 2000. Since then, many cities have released Building Energy Efficiency action plans as a sub-component of their FYPs. In fact, incorporating building energy efficiency action plans into FYPs is already a growing trend among many cities across China.

A common pitfall for cities looking to achieve building efficiency goals is the lack of a clear roadmap. Five-Year Plans in Chinese cities have played a critical role in bridging that gap. Detailed building efficiency action plans within FYPs have laid out policy directions and assigned responsibilities among various government agencies. They have helped break down efficiency targets into multiple tasks so that individual results can be tracked.

For example, Shenzhen, one of the world’s fastest growing megacities, recently released a consultation draft of its 2016-2020 action plan on building efficiency. The document provides an overview of the achievements and challenges from the last five years. According to the preliminary report, the city has accomplished all the major goals outlined in its last action plan, including energy savings of 4.8 million metric tons of coal equivalent (tce) over the five years, a 100 percent compliance rate of mandatory building energy codes for new buildings and a total of 8.3 million square meters (m2) retrofitted areas in existing buildings. While behind these numbers there is still room for improvement, these results are a significant achievement. 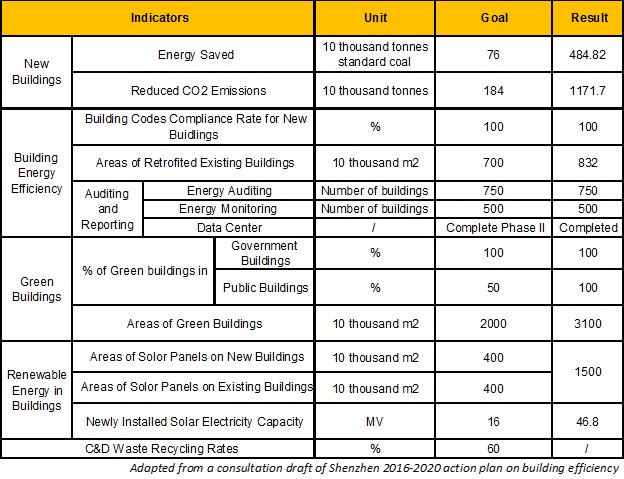 However, challenges like transparency and policy implementation persist. In response, Shenzhen’s new building efficiency plan includes expanded elements of action. Some of the key items are:

More Chinese Cities Are Coming on Board

In the last cycle of FYPs, 26 (out of 34) sub-national governments in China released local building energy efficiency action plans, and they collectively contributed to significant national progress on building efficiency. Key achievements from the national 12th Five Year Building Efficiency Plan include:

The new action plan for the next five years includes an expanded focus on encouraging local governments to act on building efficiency.  Qingdao, Jinan, Fuzhou, Xiamen and Xining are among the increasing number of Chinese cities that are joining the ranks of Shenzhen and Shanghai in developing their own action plans. More local governments should continue to join this movement.

Action Plans Are Part of a Global Solution

Too few other cities in developing countries have developed action plans to transform their buildings. Despite strong and growing commitments by 454 local governments to tackle climate change, fewer than 10 percent have actually developed a concrete action plan. Even among the growing number climate action plans at the national level (such as INDCs), too few address building efficiency directly.

Although some elements of the Chinese planning system are unique, such as the opportunity of Five-Year Plans as a policy window, action plans can be a valuable tool for cities worldwide that are thinking strategically about improving building efficiency. While cities are unique and have diverse opportunities and priorities for improving building performance, clear roadmaps at the local level are essential in order create a global impact.